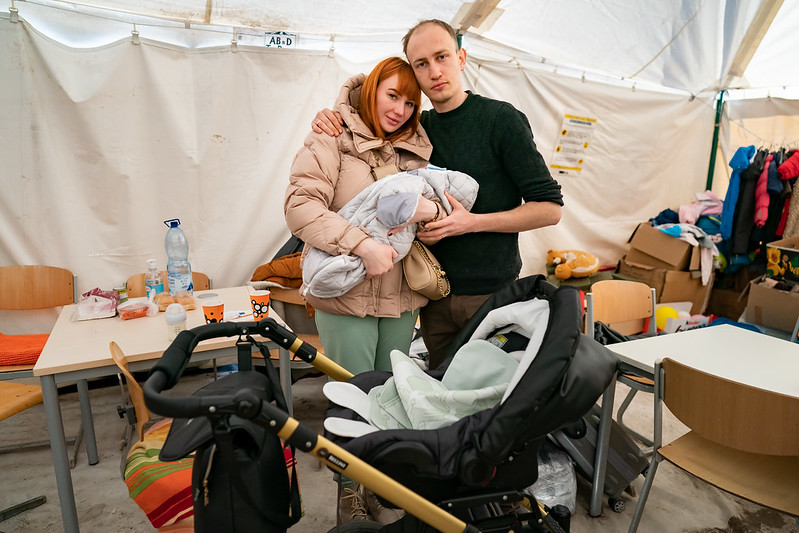 Kirill turned 21 days old the day he crossed the Ukrainian-Romanian border through Siret customs. He was born on March 2, in the northern region of Kyiv, Vyshorod, in a bunker of a local hospital.

Valeria (29), his mother, says that among the first noises Kirill heard were those of rockets hitting the city. At the same time, four other children were born, and more than a hundred Ukrainian children were born in the hospital’s bunker. They left Kyiv the day before the destruction of the Irpin Bridge and took refuge in their parents’ house. As the bombing continued, Valeria and Iurii (26) decided to leave Ukraine.

Iurii’s sister’s house was bombed and destroyed, and that scared them even more. Iurii crossed the border with a certificate of disability, convinced that he could help his country in other ways and, at the same time, give Kirill a life away from the horrors of war. Iurii’s father still remains in Ukraine, but in four months he will turn 60 and is allowed to leave the country. Currently men 18-60 are forbidden to leave Ukraine, obligated to stay and fight the war.

They crossed the border at Siret after a long and difficult road, were taken over by The Salvation Army Romania’s volunteers and guided to the first minibus to Italy. There, in Pescara, Iuri’s grandmother was waiting for her, who confirmed to us that they arrived safely after another 20 hours spent on the road.