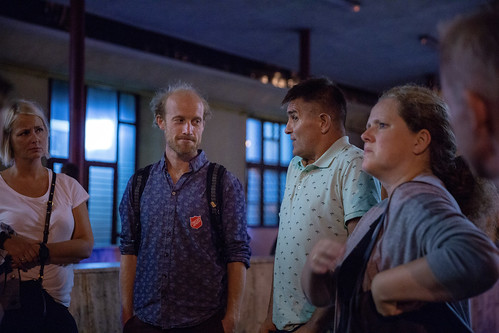 According to the Population and Housing Census in 2011, the homeless population in Romania consists of 162.375 people.The phenomenon of homelessness is rising due to the poverty and increasing housing prices. It is estimated that there are over 5,000 homeless people in Bucharest. Among the adults, it is estimated that 65% are male and 35% are female. Some of these people became homeless because the buildings of the former “nationalized houses” have been claimed and they were evicted from the houses for which they paid rent.

The program started on December 18, 2015 and it is still running

Preventing the deaths of the homeless who take shelter on the streets, providing social and health care services to the homeless who are not medically and socially insured. Providing food and emergency health care services to the beneficiaries. Increasing life expectancy and the quality of life of homeless people, providing opportunities for social inclusion for the target group, including housing, finding a workplace; other social or group activities.

Homeless people or families who live on “the streets” (including children and Roma families), people who were evicted from “nationalized homes”. People who do not own a place, don’t have access to social or decent housing. Vulnerable people who are at risk of being evicted from their own homes. Adults (over 18) or families with children in vital and social emergencies who live on the streets. People who have lost their home and don’t have financial or material resources, or a functional place to stay (no power, no water, broken roof etc.).
The indirect beneficiaries of the program are families who come from PAFA, the civil society and community in Bucharest, professionals and volunteers working in social services in Bucharest.

How to support this project:

If you feel that, come join us in the Salvation Army volunteer team!

The Salvation Army forms a team of volunteers who will work with street people during the day. If you are a student, a social worker, a psychologist, a medical assistant, a doctor or a simple citizen willing to help and hold a driving license, we are waiting for the motivation letter and your CV to [email protected]

These are located at Iasi and Ploiesti. The name Geneza is taken from the first book of the Bible, Genesis, which means ‘origin’. Our aim is to provide a new beginning for our participants, most of whom come from the poorer neighborhoods of the cities.

We offer ‘soup, soap and salvation’ through:

Our aim is to help families construct a solid foundation from which they can build their own future and children completing school. This will also assist them to find their place in the wider society.

Description:
ReDesign is a manucfacturing creation workshop, a Salvation Army Association social economy enterprise. The ReDesign project offers the possibility of professional training at the workplace for vulnerable youth and parents. ReDesign is a transition space that helps people in need move from social exclusion to employment and social inclusion. ReDesign benefits from 2 manufacturing workshops in Ploiesti and Iasi, where wallets and leather goods are made.

Programme for Roma and Romanian Integrated Children’s Education in Bucharest, Craiova and Bacau

This project is designed to help 350 children of approximately 130 underprivileged families in general education support, family integration and counselling and anti-trafficking education. There is a small amount of material support to be offered within the project. The project is aimed to run over three years and will enable the corps involved to seek out sustainability opportunities and find local resources to extend the project past the project duration. The project has direct connection to the local corps centre and it is hoped that people in this program will be attracted to the corps spiritual activities.

Aim: Improve the life of children and their families through education and for the corps to strengthen relationships with families and communities.

In this project about 35 beneficiaries will be fed once a day, 3 times per week throughout the project. The food will be prepared in the kitchen of Craiova corps. With the help of the corps, the food will be taken to beneficiaries in the station area (where they use to gather) and will be given to them. All project activities will be coordinated by an employee who will be helped daily by volunteers in the corps.   Also this project helps the Salvation Army to be seen in action. May people stop and ask why we are and why we do this work. This project is a great ability for the Salvation Army to serve God.

Aim: Create a community that foster new partnership, to deliver a high quality feeding program that gives hope, compassion and security for the homeless.

This project is for homeless and disadvantaged people living in the city of Craiova. The Salvation Army has been working  with and serving these people for a number of years. Through this project it is planned for approximately 20 homeless people to shower, get a haircut and wash their clothes each week. The beneficiaries will be served with hot drinks and food. They will be offered socks and underwear and, if necessary, they will be given a change of clothes and shoes from donations that the corps receives. All the activity will take place in the corps building and with the support of the church volunteers.

Aim: Improving life quality of homeless people and of disadvantaged families, with the possibility to ease their life in society.

This project is designed to enable homeless and disadvantaged people access to laundry facilities, shower facilities and provide education, social and spiritual activities that will enable them to integrate into the community and have their physical, emotional and spiritual needs addressed.

Aim: This project seek to raise the quality of life of the poorest, most socially disadvantaged and spiritually isolated people in the Iasi community. The project does this by offering a holistic ministry for people in the community. This project is not just about laundry but seeks to give people a life changing experience and a belonging christian community where they feel valued and loved.

The Volunteering Resources Centre in Bucharest

Description:
Over 3,3 million volunteers of all ages have given their time, skills and resources to support The Salvation Army’s activity in all the world. Although at a European level the population in Romania is not very active in the volunteering field, compared to other European Union countries, our organization, through this program, wants to promote the Salvation Army International experience that unfolds programs in over 130 countries with the help of volunteers. We believe that volunteering itself is a type of life-long learning for adults through which participants, when in action, develop their skills and competences needed in their personal and spiritual growth.

We want, through this project, to increase the number of the involved volunteers, to increase the involvement rate of the citizens in the community, to innovate the field of volunteering and to increase the visibility of volunteering among the members of the communities in which we work. Most of the volunteers work with enthusiasm on short-term. One of the objectives of the Volunteering Resources Centre is to identify the motivation and aspirations of the volunteers, that could make them to take action constantly, with enthusiasm, and on the long term in educational, social, community or humanitarian projects and programs of the association.

Running time:
The project started on December 5, 2018 and it is still running.

Promoter & Partners:
The project’s promoter is The Salvation Army in Romania Association.

Volunteers, pupils, students, employees, retired people, associations and foundations that unfold activities in Bucharest during summer, the community in Costinesti.

*** We believe in people and we believe that promoting volunteering in Romania can lead to positive change in society. To do this, we make constant efforts. You can support this program again this year by either:

Description:
SALVATtex is Salvation Army Association social economy enterprise. SALVATtex is a platform that provides training at the workplace or training for employment. SALVATtex is a transition space that helps people in need move from social exclusion to employment and social inclusion. SALVATtex benefits from a sorting process in Ploiesti of the “occasional” textile products that it distributes to the SALVATtex store network that reached its 6th store. Revenue from store sales returns into the social projects ran by The Salvation Army. Through SALVATtex, it is also offered the possibility of professional training at the workplace for disadvantaged youth and parents.