The Angel Tree program is one of The Salvation Army’s highest profile Christmas efforts. Angel Tree was created by The Salvation Army in 1979 by Majors Charles and Shirley White when they worked with a Lynchburg, Virginia shopping mall in the USA to provide clothing and toys for children at Christmastime.

The program got its name because the Whites identified the wishes of local children by writing their gift needs on Hallmark greeting cards that featured pictures of angels. They placed the cards on a Christmas tree at the mall to allow shoppers to select children to help. Thanks to the Whites, who were assigned by The Salvation Army to the Lynchburg area at the time, more than 700 children had a brighter Christmas that first year.

Three years later, when the Whites were transferred to Nashville, Tennessee, Angel Tree was launched in the Music City. Today thousands of children all over cities in the US are given a Christmas to remember that they otherwise would not be able to celebrate.

Last year we officially launched The Angel Tree Program here in Bucharest, Romania helping almost 100 families and children in need with gifts and supplies. And this year we plan to expand even further. Participate by signing up to select a child to shop for and before Christmas we’ll deliver those to these families around Romania.

Thank you for your continuing support. 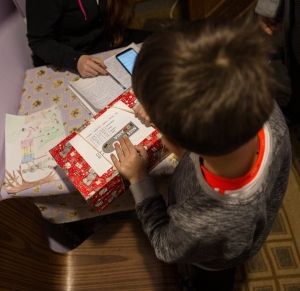 How you can help?

Find one of our locations hosting Angel Tree